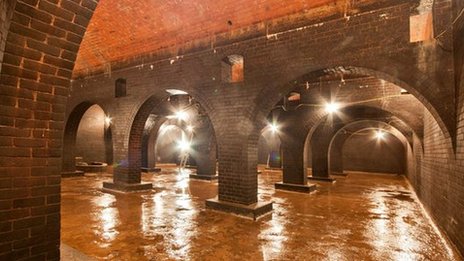 An underground Victorian reservoir is to be opened to the public before being demolished to make way for houses. The brick-vaulted Clayton reservoir, decommissioned 21 years ago, is under land in Back Lane, Clayton-le-Woods. Campaigners have not been able to raise money to preserve the reservoir and had failed in applications for it to be made a listed building. Paul Jones, from developers Kingswood Homes, said it would be open for guided tours for two weeks. He said: “We felt it was important to open it to the local community to give them the opportunity to come and have a look at the archaeology and the history.”

Rosemary Boyd, from Chorley Historical Society, said: “At first we were very disappointed because we couldn’t get the funding, but we’re very pleased it’s being made available for the community to see, especially the children.” Built in 1884 to provide water storage for Leyland, the reservoir was decommissioned 21 years ago. Previously owned by United Utilities, it was sold at auction in March. Historian Boyd Harris, who has written a commemorative booklet on the reservoir, described it as “like being in the hall of the mountain king”. English Heritage has twice refused an application for the reservoir to be made a listed building. It said it does not fulfil the criteria for national recognition as it is “neither a rare nor an exceptional example of its type”. From Saturday, the reservoir will be open for two weeks for free guided tours between 10:00 BST and 16:00 BST.